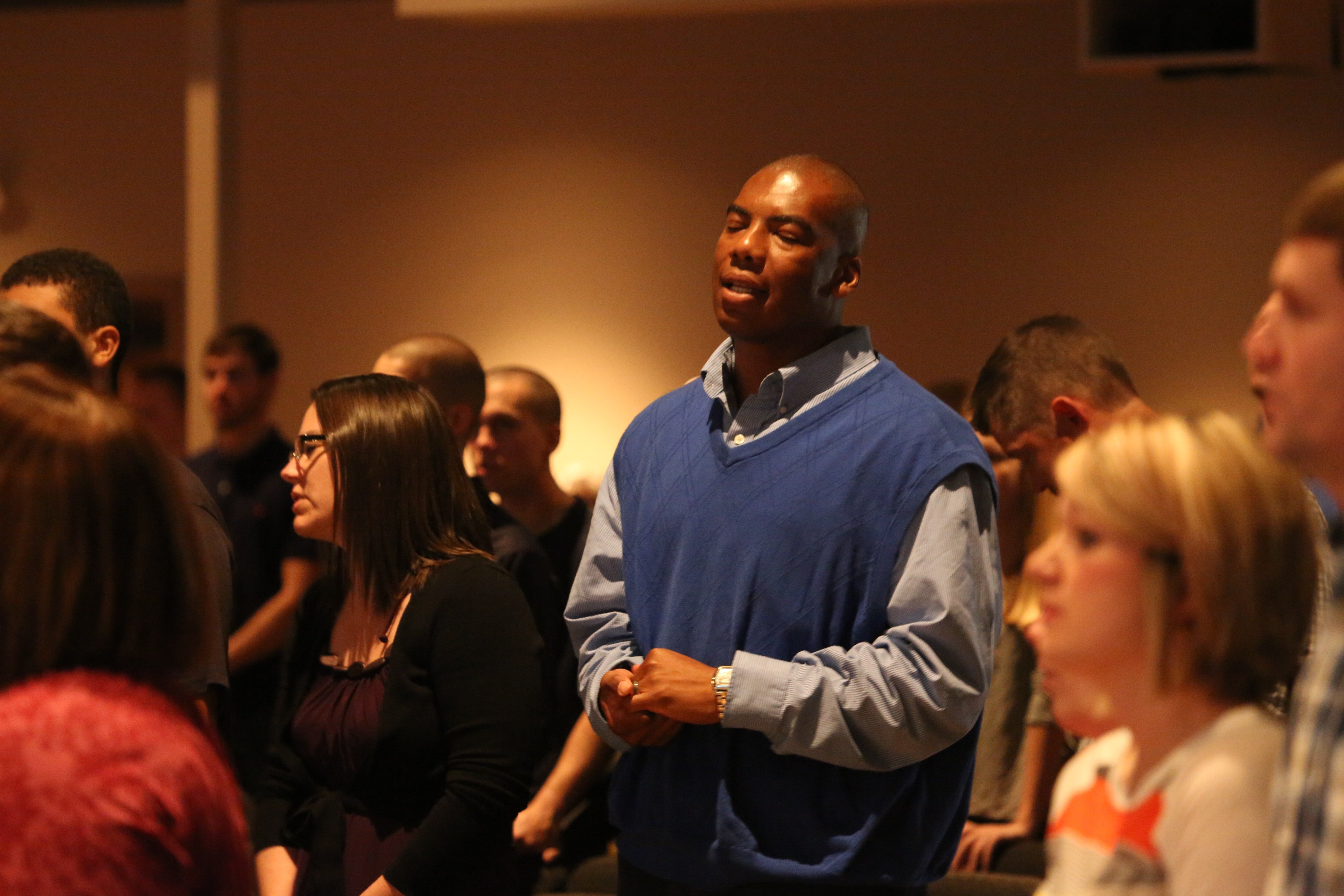 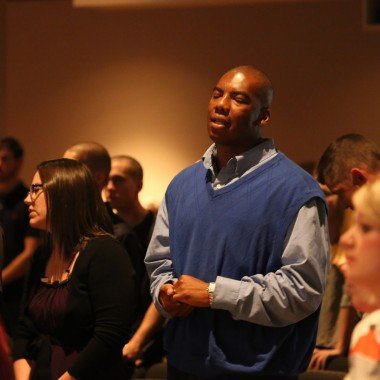 Tambouzi Green is a man’s man whose life is as interesting as his name is cool. Pronounced tam-BOO-zee, his name is Swahili and means “lover of art and music.” His imposing stature gives way to a strong, engaging demeanor that puts a person immediately at ease. The nearly two hours spent listening to his story seemed like ten minutes and left me looking forward to our next conversation.

Green is the kind of guy I would have fun playing on the basketball court, though based on his height and years of playing high school and college hoops, it would leave me with an even more realistic assessment of my own abilities (or lack thereof) on the court.

Born in Chicago on September 1, 1974, Green was raised by his grandparents, while his parents were in college full time. Though his father came to the U.S. from Panama to study medicine, he ended up going to college on a basketball scholarship.

You would never guess this big guy was raised in “Big Sky Country” (Montana). His family eventually moved from Missoula to a town called Colstrip, population 2,000. His was one of only two black families in town. Green was the oldest of four, and became the typical older brother who was overprotective of his two sisters and brother. His dwellings were modest, living first in a single-wide trailer, then later in a double-wide. He grew up in the Church of Christ, where he gave his life to Jesus and was baptized at the age of 16.

After graduating high school, he went to Montana State University-Billings, where he played basketball for the Yellowjackets and met his future bride, Vanessa. He recalled fondly how he chased her for three years, telling her that someday she’d be his wife. It was easy to see how this man’s blend of authentic charm, humility and persistence would win over his college sweetheart.

Meanwhile, his best friend Christoph from France, who had led him to Christ in Montana, persuaded him through a two-day bus ride from Dickinson, North Dakota to move to Phoenix, Arizona. At Arizona Bible College, he met Tom Kyper, who became his coach and father figure, and would ultimately show him what a Godly marriage should be. 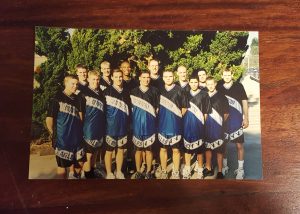 During Green’s college years, he experienced a series of events that would change his world. As he recounted them, he stopped to share that he was a guy who maintained a strong exterior who didn’t show his emotions much, and no matter what was going on around him, appeared happy. He was popular, a role model, and the go-to guy. Despite all this, Green didn’t have anyone to talk to or confide in.

As captain of the basketball team, it was difficult when Arizona Bible College was forced to close for lack of funding, leaving him to face a dark, depressing period in his life. Green started questioning God about His plans, not seeing the sort of promise he had enjoyed before.

Soon thereafter, he transferred to and played basketball for a rival, Southwest Christian College. Though he seemed to have landed on his feet, his heart wasn’t there. As a way of dealing with the inner turmoil, basketball became an idol for him. He wanted to play professional basketball and soon devoted all his time and energy toward that goal.

Naturally, this began to strain his marriage. Vanessa had borne him a son Esequiel (pronounced Ez-uh-KEL) in 1997 while attending Arizona Bible College and a daughter Noelle two years later.

Green would play with the kids when at home, but would spend increasing amounts of time away, relentlessly training for basketball. In the process, the marriage struggled from lack of communication, and he became distant from those who loved him. In questioning God, he realized that something had to change.

During this one of many periods of self-examination and reflection, he felt God prompting him to join the Army to help him get his life straightened out.
Green found himself on 9/11, ready to ship off for basic training, watching the Twin Towers fall, and saying “I’m going to war – God, I hope you know what you’re doing.”
God put him in the Infantry, the toughest, most demanding part of the Army – physically, mentally and emotionally. It was at this point that Green felt God needed to show him not only who Green was, and what he was capable of, but of who God is, and what He is capable of.

After a pretty enjoyable tour of duty in Hawaii where he excelled in the schools they sent him to, he would be deployed to Afghanistan, the first desert experience which he roughly equated to the forty days of testing in the desert that Jesus endured (and prevailed). This first deployment was eye-opening, exposing him to the cold, harsh realities of war, of “bad people doing bad things.” “Lord, I may have to kill people who may not know You” he remembers thinking, agonizing at the notion that people would be trying to kill him who believe their god is right. The dilemma left him wrestling with the religious ramifications of war.

Through his various deployments, Green saw a lot of evil, mean people. He was given the sobering task of destroying the enemy, and knew he might not come back. Knowing this, he trained his men hard, and to be a tight-knit group. He prayed with his men before every mission, starting with as few as two, three or four men. As the realities of war began to sink in, other men began to join in the prayer groups bringing to mind the old adage “there are no atheists in fox holes.” The group grew in number (and in maturity) from prayer. It was a difficult mission, and many men were lost.

Returning from that deployment, Green again recalls being “messed up.” While others looked up to him as a strong, Godly man, he couldn’t figure out what was eating him inside. In an attempt to find the answer, he sought help from psychiatrists, but the medical solutions did not resolve the issues that touched the depth of his soul.
By the third deployment, this one to Iraq, things calmed down some, and God showed him good people. His duties involved passing out school supplies and teddy bears at schools being built, developing relationships with people, including locals, Iraqi police and Iraqi military. In the process, he was able to talk to them about God and about Jesus. One of the translators was so affected by Green’s calm spirit in the midst of the uncertainty attendant with being in a war zone that he gave his life to Christ. People there were (and are) seeking but need guidance.

During a house search in Sadidyah, Iraq, he met a Kurdish family. Seeing an armoire, he opened it, felt around on the inside, and discovered a hidden shelf from which he pulled a Bible that had been stashed away. Directing the family to leave the room and the man to stay, Green asked the man, “Where did you get this? Is this yours?”
An expression of abject fear covered the man’s face at the prospect that his answer might cost him his life, but he looked at Green and admitted yes, it was his. Impressed with the man’s courage and obvious willingness to die for merely owning a Bible, he assured the man that he, too was a Christian, reached out and hugged him, and they cried together. Such is the shared experience of believers in Christ who are willing to die for the One who died for them. A joy that defies words. 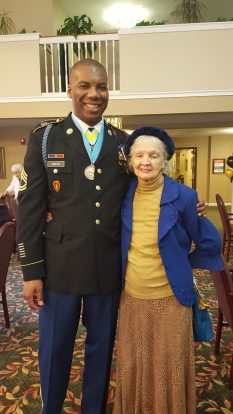 He called the family back into the room, discovered they were all Christians, whereupon they cried and rejoiced, and spent three more hours together. The man had been holding Bible studies in his house. He shared some of the hardships he faced at work, and was just a regular guy.

Even in the midst of his own personal battles, Green has influenced men in his command, causing one of his team leaders to ask him to join his Bible study. During his time in Germany, he had the privilege of baptizing three soldiers who approached him expressing that desire. God has shown him “I am bigger than all of your problems”, and “It isn’t Me who lets go of you; it’s you who let go of Me.” This is a truth we would all do well to heed.

Today, as an E-7 at Fort Benning, Green acknowledges the idea that to be in the Infantry, you must be a hard, tough man. However, he is proof that you can be a tough man, have morals, and still care about people because of what God has done in his life.

A recent conversation with our Lead Pastor Jeff Struecker at a basketball game brought about the idea of starting a basketball ministry for men. Whether that would entail one- or two night a week, or a couple of times a month, it could incorporate devotions, fellowship, Bible study, and a time where guys can meet, shoot hoops and be ministered to where they are.

We agree that guys feel as though they have to put on a front, be tough and invincible. But at such a basketball camp, they could let their guard down, be authentic and vulnerable, and sharpen each other as we are called as men to do; talk about their challenges, their victories, their faith.

Men, how about it? Where are you? Are you up for it? The ball is in your court.