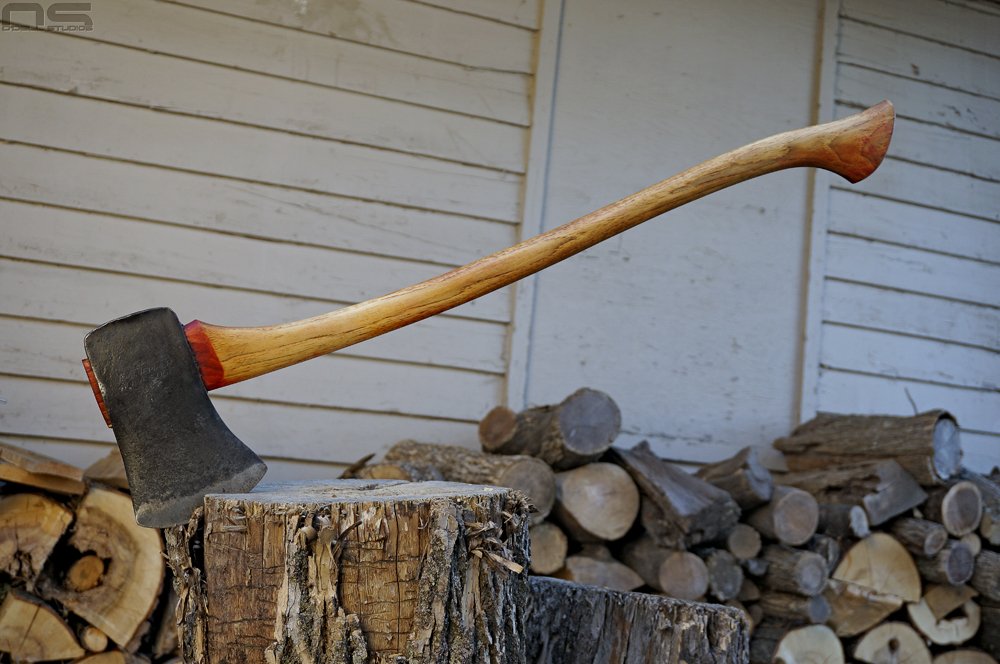 Chopping wood can be a dangerous endeavor if you don’t know how to handle an axe. However, it can also be dangerous if the axe that you’re using is not safe. An axe, by its very nature, is designed to cut deeply into a hard surface, which means, if you don’t know what you’re doing, you can seriously injure yourself with an axe.

The next time you’re at a hardware store, look carefully at the axes. You’ll notice that the manufacturers put most of the attention into the point where the axe head meets the handle. An axe with a loose head is a hospital visit waiting to happen! If you’ve ever picked up and axe head that is loose on the handle, you know just how uncomfortable it feels to use this tool. The problem with the loose axe head is, you never really know what to expect. The thought that usually runs through your mind is… Maybe the head will stay on when I take a swing at the wood; maybe it will come flying off and seriously injure me.

Axes must be sharp in order to cut through wood. However, axes must be stable or else they’re completely useless instruments. For the next few moments I’d like to talk about consistency in the way that we behave, because the person who is very consistent is usually easier to understand (even if he or she consistently behaves poorly) than the person who is erratic in his or her behavior. Here are a couple of thoughts about consistent behavior patterns.

It’s dangerous to swing an axe handle if you know the head might fly off. If you were certain that the axe head you were about to use would fly off, at least you could prepare yourself for it. That axe may be dangerous, but at least it’s predictable. I believe this is also true when it comes to human behavior. Even someone with predictably bad behavior can be better to deal with than an erratic person.

When it comes to behavior, consistency makes all the difference in the world. As I was preparing for this blog, it occurred to me that I have never heard anyone dispute the sincerity of Billy Graham’s faith! I have known many people who disagreed with his faith, but I have never met anyone who doubts the veracity of his faith. It occurred to me, the reason why everyone believes that Billy Graham genuinely believed what he taught, is because of his consistent behavior. His behavior demonstrated what he believed. The power of Billy Graham’s faith wasn’t in the size of the crowds, but in the strength of his convictions.

The second type of person is the one with erratic behavior. This is like swinging and axe not knowing if the head will stay on or will fly off. This type of axe is much more dangerous than the head that might stay on or might fall off. This type of person is much more difficult to deal with because you generally don’t know what to expect from his or her behavior next. We have a word in the English language for this kind of person…Hypocrite.

No one likes a hypocrite! I’m convinced, most people would prefer to be around someone who regularly behaves poorly than to be around a person who is erratic in his or her behavior. But it’s even worse to be around somebody who claims to believe right and yet behaves poorly. When your behavior and your beliefs don’t line up, it leaves everybody disappointed! This is the most dangerous of all axe head scenarios. This is the most difficult person to have a relationship with… because you just don’t know what you’re going to get next.

Don’t forget; this blog is talking about an axe head. Since we’re talking about axe heads, we all want the head to stay on consistently! An axe is supposed to be sharp. Axes are made to cut. Swinging an axe head is a dangerous task if you don’t know what you’re doing. It’s even more dangerous if the axe that you’re using is not consistent.

There’s a fascinating event that happens in the Bible when describing behavior and beliefs. There is a hypocritical couple in Acts 5:1-2 named Ananias and Sapphira. This hypocritical couple claims to give everything that they made to God. However, they were trying to deceive the church by holding something back. Don’t get confused about this passage of Scripture… God is very angry with Ananias and Sapphira for this deception. In Acts 5:5-10, God kills this couple instantly for their deception.

I am convinced this event was not necessarily about the money. I really believe this tragic event in the Bible was all about hypocrisy. This couple wanted the attention and the praise for doing a good deed, when deep in their hearts, they knew their behavior and their beliefs were not equal. And because you can never pull the wool over God’s eyes, he took immediate action to let the church know that sin like this would not be tolerated. Don’t make the mistake of hypocrisy. Live out what you claim to believe. You owe it to yourself, others, and God to be consistent with your behavior. No one wants to use an unpredictable axe head… No one likes a hypocrite!