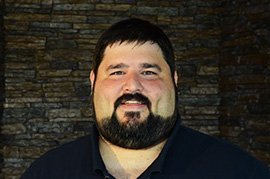 FAMILY DESCRIPTION:  Alan and Marinda have been married since April 20, 2002, and have a son named Eli.

EDUCATIONAL AND MINISTRY EXPERIENCE: Alan has a BS in Biology and a BA in Theology from Bryan College in Dayton Tennessee.  He taught high school science and Bible for over 10 years at Calvary Christian School. He was licensed into the Gospel Ministry on October 24, 2004, by Calvary Baptist Church.  He served 4 years as the Minister to Young Adults at Calvary.

He worked for six years at Realtree in the TV/Video department as a producer for national outdoor hunting programming airing on Outdoor Channel, Sportsman Channel and Fox Sports. He was involved in developing a video platform to deliver hunting content via mobile and web devices. The platform became Realtree.TV and is the go to site for premium hunting content.

He has also been the owner of a local web development company called Media317. Since 2006, Media317 has been used to equip the saints (II Timothy 3:17) by developing quality web platforms for small businesses, churches and non-profits.

He joined the staff of Calvary in June of 2013, as the Communication Arts Pastor. Using his experience in TV, video, design and web, Alan Smith is leading the online and offline communication efforts of the church. His goal is to provide the creative tools that both enhance our worship experience and remove distractions from worship.

FUN FACTS: Until he was married, most people called him Bubba