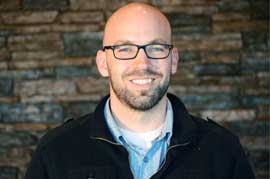 FAMILY DESCRIPTION:  Frank and Paige have been married since November 22, 2008 and have a son named Austin Paul and a dog, Nala.

EDUCATIONAL AND MINISTRY EXPERIENCE: Frank has a BA in Christian Studies from Brewton-Parker College in Mt. Vernon, GA and a MA in Apologetics from Luther-Rice Seminary in Lithonia, GA.  He is currently enrolled at Southwestern Baptist Theological Seminary pursuing a Master of Divinity.  He served as Student Pastor for over six years at Central Baptist Church in Columbus, GA from 2008-2014.  A longtime supporter and volunteer to Baptist Collegiate Ministries (BCM), Frank became the co-campus minister to BCM at Columbus State University and LaGrange College after God directed him to a position as State Missionary with the Georgia Baptist Convention’s Collegiate Ministries department in August of 2014.

He joined the staff of Calvary in January of 2015 as Student Pastor.  He is dedicated to partnering with parents in the discipleship process of their teen(s).

FUN FACTS: Frank and Paige are members of a local motorcycle “gang,” Calvary Riders through the Christian Motorcyclist Association. He rides a Honda Shadow VT1100 cruiser

FAVORITE RESTAURANT DISH: A rare steak or Lasagna is hard to beat