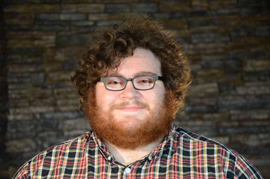 EDUCATIONAL AND MINISTRY EXPERIENCE: Michael grew up in Phenix City, graduated from Smiths Station High School, and attended the University of Alabama to study Tuba Performance with Demondre Thurman and Music Education. He joined Calvary’s staff in Spring on 2012 as Video and Media producer, and became the Worship Arts Pastor in February of 2017.

FUN FACTS: Michael has spent a good portion of his life being called Timmy because of a joke played on him by his classmates. He has played in an orchestra accompanying Sandi Patty, and marched in 2 nationally televised Thanksgiving Day parades. He is also very bad at using a waffle maker.

HOBBIES: All things music, including, performance, writing, theory, and musical theatre. Book collecting, and watching and critiquing movies with friends.